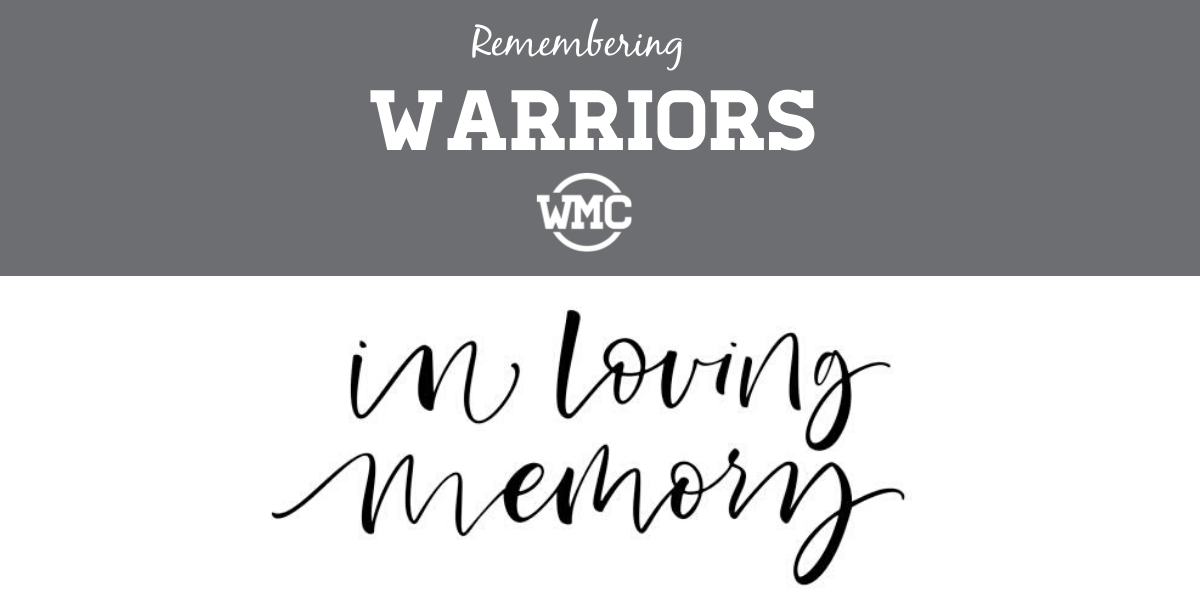 “MY BODY AND MIND MAY FAIL, BUT GOD IS MY STRENGTH AND MY PORTION FOREVER.”  -PSALMS 73:26

Mr. Thomas Joel Fisher, age 72, passed away Saturday, May 4, 2019, in Muskegon. Tom was born March 9, 1947 to Joe and Thressa (VanderWall) Fisher in Muskegon, and was a lifelong resident. He was the co-owner of Fisher Brothers Greenhouse and was a U.S. Air Force veteran. Tom was a member of Temple United Methodist Church and was active with Supper House Ministries. He worked and volunteered at the USS Silversides Submarine Museum and was a volunteer at the Frauenthal Center. Tom was a man of faith who loved his family, especially his grandchildren. He also enjoyed reading and activities with the Old Speckled Hen MG Club. On March 3, 1972 Tom married Jacqueline Rose, and she survives him along with 4 daughters.

Marshall was an active third-generation charter member of Spring Lake Christian Reformed Church. He enjoyed outdoor activities, fishing, hunting, camping, gardening, and he loved woodworking. His faith was foremost in his life, and also family was very important to him. Marshall served his country in the US Army. He worked as a contractor for many years and was a city assessor and building and fire inspector for the City of Ferrysburg.

Delores J. Wierenga, age 93 of Grand Haven, peacefully left this world and entered Heaven. She was born on May 24, 1926 to Art and Jennie (Winkle) Hoekwater in Grand Rapids, MI. Delores graduated from Sparta High School in 1945 and married Harold Wierenga Sr. on October 21, 1949. They were happily married for 52 years until Harold’s death in 2001.

Delores was a member of Second Reformed Church for 64 years and was part of the choir, Ladies Guild, and Mr. and Mrs. Fellowship group. She loved flowers and was an avid gardener. Delores deeply loved her family and was faithful to her friends.

Margaret graduated from Shelby High School in 1946 as valedictorian of her class. She proudly graduated from the Hackley School of Nursing in 1949. Margaret married John William Dolislager, her husband of 60 years, on October 18, 1950.

In addition to being a dedicated and loving mother of six children, she worked at Hackley Hospital for over 40 years with the majority of that time serving as an RN in the emergency room where she loved the work and variety of patients. She was well-respected and held in high regard by her coworkers; she treated each and every patient medically and personally with dignity and respect.

She loved to knit and crochet items for family and friends; she also created and maintained genealogies for both the Dolislager and Folkema families. She was a lifelong member of the Christian Reformed Church and member of the First CRC in Muskegon. While at First CRC, Margaret published the church newsletter “The Messenger” for many years. In her early retirement years, she and her husband distributed Bibles as a part of the Reach Out Bible Ministry. Margaret touched many people’s lives and was widely loved.

He was born on April 8, 1952 to Franz and Elisabeth Sellinger in Waiblingen, Germany. Fred married the former Rose Miller on September 25, 1971 and she preceded him in death in 1999. He proudly served his country while in the United States Army during the Vietnam War from 1972-1974. Fred enjoyed spending time outdoors watching the birds and deer and camping. He was a great handyman who could fix anything. Fred liked to pull pranks anytime he could and was a known jokester. He could usually be found watching cartoons or the SyFy channel or taking his ’66 Ford Fairlane he named ‘White Rat’ out for a drive.

Luckey, Weldon Weldon Deeds Luckey, age 89 of Grand Haven, passed away on Sunday, December 15, 2019. The Funeral Service for Weldon will be at 10 a.m. on Thursday, December 19, 2019 at First Christian Reformed Church in Grand Haven.

VanderWel, Elaine M. Muskegon Mrs. Elaine M. VanderWel, 83, went to be with her Lord and Savior Sunday, December 22, 2019. She was born July 4, 1936 to George and Mary (Dood) Tjapkes in Muskegon, and was a lifelong resident. Elaine had worked at Vanderveldes Furniture and Art Van before retiring. She had been a member of the former First Christian Reformed Church, and is currently a member of Calvin Christian Reformed Church. On September 5, 1956 she married Wayne E. VanderWel.

Ed was born to the late Fred and Jennie (Noteboom) Bushouse on September 4, 1922 in Kalamazoo, MI.

After graduating from Kalamazoo Central High School, given his aptitude for numbers, he went on to earn a two-year Business Degree at Mahers Business College. Ed was drafted into the Army on December 26, 1942 at the age of 20 and moved into the Army Air Corps in January 1944.

After he returned from the war, Ed married the love of his life; the former Phyllis Balgooyen, on July 26, 1946 in Grand Haven.  He built a home, which they shared for 64 years. Ed and Phyl enjoyed a strong, loving marriage for 67 years until she went home to heaven on Feb. 25, 2014.

Ed was very passionate about and dedicated to God, his family, his church, his community, and his country. He was involved in the banking industry for 41 years. Ed began his career as a teller at the People’s Bank & Trust Company which later became NBD of Grand Haven and now is Chase Bank; he retired in 1987 as President, CEO and Chairman of the Board.

Ed was a very involved member of Second Christian Reformed Church where he served as an elder, deacon, and treasurer, along with many other volunteer positions. He was also on the initial building committee for their current building.

Ed was very active in the Tri-Cities area throughout his life. He was treasurer of the Christian Reformed Conference Grounds, Haven School for Handicap (Kandu), and the Ottawa County Citizens Mental Health Council. He was a secretary for the American National Red Cross, and he served on the Salvation Army Advisory Board, the Economic Development Corp. Board, and Northwest Ottawa Industrial Development Corp. Ed also served as President of the Optimist Club and a past member of the Chamber of Commerce, Grand Haven Jaycees, Grand Haven Rotary, and the Spring Lake Country Club. He was a co-founder of the Tri-Cities area chapter of Habitat for Humanity and served as chairman for 12 years.

Thelma A. Bergman, 90, widow of Vernon Bergman passed on January 1, 2020. She was born on July 23, 1929 to Marinus (Rean) and Ella (Sieplinga) Cook in Muskegon, MI. Thelma graduated from Muskegon High School in June of 1947, and on September 15, 1956 she married Vernon Bergman. Together they raised their four sons.

Thelma retired from Muskegon Community College, was a founding member of Celebration Community Church in Muskegon, and a long-time member of the former East Muskegon Christian Reformed Church.

Sandra Kay Olthof, age 80 of Grand Haven, passed away peacefully at home on Wednesday, January 8, 2020, surrounded by her family. She was born on July 28, 1939 in Caledonia, MI to the late Frank and Rose (Maichele) Polinskey. Sandra married Charles Olthof on August 19, 1967 in Holland, MI. He preceded her in death on March 7, 2010

Sandra lived in Grand Haven for 44 years, after moving here from Holland. She worked at Meijer in Grand Haven for over 40 years, and was a longtime member of First Christian Reformed Church. Sandra loved biking, knitting, and feeding the wildlife around her home. She loved her children, and especially loved spending time with her granddaughter and great-grandson.

Mr. William C. “Bill” Wolffis, age 77, peacefully passed away on Thursday, January 16, 2020 at North Ottawa Hospice in Spring Lake, MI. He was born in Muskegon on March 7, 1942 to Raymond and Grace (Yonkman) Wolffis, and was a resident of the area most of his life.

Bill was employed by CWC for 13 years, working the remainder of his professional career at Kaydon Corp. where he served as V.P. of Administration until his retirement in 1987. Bill was a proud member of the 1958 Western Michigan Christian H.S. State Championship Tennis Team and continued to be an avid tennis player and golfer. He was a huge sports fan and especially enjoyed attending his kids’ and grandkids’ sporting events.

Bill was an active member of Calvin Church where he served as an Elder, and on various committees. He volunteered with International Aid where he traveled to Africa on a needs assessment team. He served on the General Hospital Board of Directors, including one term as President. Bill’s Pulmonary Fibrosis diagnosis necessitated a lung transplant in 2009 and he was blessed with a strong healthy lung for more than 10 years. He was dedicated to his faith, family and friends and was generous to others in need.

Nancy graduated from Whitehall High School in 1949, married Edward Dykstra, moved to New Era and became a farmer. Nancy and Ed had 53 years working the farm and selling fruit at various farmer’s markets. They spent their winters in Florida for many years. During their later years they traveled all over the USA. After Ed’s death Nancy attended a high school reunion and ran into a former high school beau (Jeff) whom she married a couple of years later. They also wintered in Florida, traveled and spent time at Jeff’s cabin.

He was born in Muskegon, MI to Peter and Elizabeth (Heeres) Van Andel. He graduated from Western Michigan Christian High School and Muskegon Community College. After graduation he worked for Professional Ambulance, then in 1981 began his career in law enforcement as a deputy for the Muskegon County Sherriff Department, retiring in 2011 at the rank of Lieutenant.

He enjoyed golfing, traveling, and anything with speed from his Harley to his golf cart, as well as wintering in Mesa, AZ after retirement. Jack was a beloved friend leaving his imprint wherever he went. On September 5, 2003, Jack married Cheryl Dyer and they became inseparable best friends. He wholeheartedly endorsed his role as a father and grandfather and loved spending time with family.

Terry Lee Alman, age 69 of Grand Haven, went to be with his heavenly Father on Thursday, February 13, 2020 at home surrounded by his wife and three kids. He was born on March 27, 1950 to Frederick and Evelyn (Pigusch) Alman in Grand Haven.

Terry graduated Grand Haven High School in 1968 and went on to receive his Associates Degree at Muskegon Community College. He worked at Hazekamp Meats for 28 years before his retirement and never missed a day of work. On September 18, 1976, he married Cheryl Bekins in Grand Haven.

Terry enjoyed fishing, golfing, cooking, and above all spending time with his family. He loved traveling to Florida and was a big fan of the Maize & Blue.

He was born January 7, 1950 to Chester and R. Elaine (Hubbard) Ring in Marion, Indiana. Steve was a U.S. Army veteran, who also served several years in the Army National Guard following active duty. Steve was also the parts and service manager at Shelby Ford.

Steve and Norma were members of the former First Christian Reformed Church, and are presently members of New Era Reformed Church. Steve enjoyed golfing and bowling before developing Parkinson’s Disease. On May 19, 1973 he married Norma G. Hackney.